After a long term of rowing and an eventful but successful Lent Bumps campaign, M1 reunited for what would be their final outing of the term - The Head of the River Race on the Tideway. After one of the most poorly attended crew dinners possibly ever the night before, featuring the obligatory screening of ‘True Blue’, race day began at the crack of dawn, as we left Cambridge at 6am for the drive down into the Capital. After Santiago “is anyone else going blind” Dubov’s shambo

Men's 1st VIII The Saturday of a Bumps campaign is always eagerly anticipated by crews, hoping to end on a high and bump in front of crowds at the Plough Pub or Grassy Corner, finally wash their disgusting boat and unisuits, and in the case of four-seat Nils “Sit Up” Burger, end the longest run of alcohol abstinence in their entire adult life. Heavy snow the evening before set the nerves jangling for a repeat of Thursday’s race abandonment, but tropical temperatures on the da

Men's 1st VIII After the heroics of college boat clubs pulling together to clear a path for cyclists to follow the crews (and to allow Jesus to have a clear river for an outing), Day 4 of Bumps was on. Silas had returned from being a useful snow shovel to his rightful place in the boat as our natural three seat and M1 paddled down to the marshalling area with all the grace and finesse of a fish out of water, flopping aggressively from side to side. Once our coach Ben “Tripos

After the cancellation of the M1 division on Wednesday afternoon and the sub zero temperatures that followed into the night, it was no real surprise that CUCBC decided to abandon races on Thursday. Curtains were pulled open in the morning to another fresh dusting of powder, and a gloomy sky that looked ready to drop more of the white stuff. Come midday, the rowers of Cambridge had become frustrated at the possibility of missing an entire bumps campaign, and cometh the hour, a 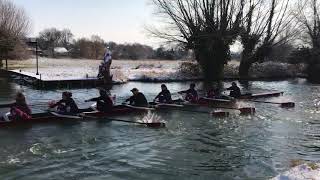 Women's 1st VIII On the second day there was what can only be called a blizzard (by Cambridge standards), but we battled the cold and knew we had a real chance of beating Christ’s W2 (who got bumped by Hughes Hall the day before to become the sandwich boat between Division 2 and Division 3). We paddled down to the start in heavy snow and got into place, visualising the race ahead. Once we started we could feel that the cold didn’t do our rowing any good; we rowed well but not

Men's 1st VIII Now into the fifth year of The Great Pilgini's Five Year Plan, (which has already seen a rise of nine places in the Lent Bumps, a 6.3% drop in 2k times and a 13.9% increase in the quality of chat), M1 were looking this year to make further progress up Division 2. Off the back of CCCBC's first overseas training camp, M1 came into Lent term with a crew made up of four novices, and only three returners from last year's May campaign. In the bows, Santiago "ask me f